After months of frantically e-mailing, running around Tana, and bugging the group of Peace Corps volunteers involved in the Books for Africa project (which I’m sure people are sick and tired of hearing me talk about) I finally found myself standing in a Tana school yard, with the tangible result of all of our efforts being swung full force into a tree. To explain better, a group of Malagasy construction workers were unloading the 40-foot, 4 ton shipping container that had transported 660 boxes of 22,000 books and 4 laptops from Savannah, Georgia to Antananarivo, Madagascar from a truck, and placing it in a Tana school yard to be eventually turned into a guard house com teacher lounge. They weren’t terribly graceful about it, and managed to nick off several tree branches in the process.

I didn’t care about the tree though, obviously. I was just marveling at the hugeness of the container and the overwhelming amount of books currently stacked in a classroom and waiting to be shipped off to their new homes. (Earlier in the day, the school had stopped class so students could unload the books from the container into the classroom while I was sitting in painfully slow Tana traffic on the other side of town. I just had to love Madagascar a little for being able to drop a whole school’s studies to force the kids to do manual labor. Don’t feel too bad, they got juice and cookies as a reward.) Mostly, I was filled with relief that the container had made it, and that seeing it in person meant undeniable, verified proof that we had actually succeeded with the most difficult part of our project: getting the books across an ocean and past Malagasy customs. Even though I knew the work wasn’t quite done yet — we still had to sort and distribute the boxes among 18 PCVs — seeing that container swinging into a tree in a Tana schoolyard meant the worst of it was over.

Not everyone in the project thought it would ever be completed, and understandably so: we’ve had a lot of bumps and hurdles. Almost a year and a half ago now, we had our first stall in the project when trying to raise the $19,000 USD we needed to purchase the books, pay for shipping, and get them distributed around Madagascar. Then, very sadly, the PCV who originally started the project, Lynn Brown, was separated from the Peace Corps for medical reasons and had to pass her leadership along to another volunteer, Brittany Bemis, who led us through the ordering process. Even though Lynn was no longer a PCV, she still remained involved in the project and project fundraising. She showed some serious dedication and yes, her site got 1,000 books just like the rest of us! Brittany, however, didn’t have regular enough access to internet or the ability to come to Tana frequently (which would prove essential as we got to the stage of the project where we needed documentation for the container and permission to import) so she passed it along to me.

Our next set of hurdles came with navigating Madagascar’s importation system. It’s hard for me to bite my tongue and keep my criticisms under wraps, but they didn’t make things easy. Madagascar isn’t helping themselves either by complicating the process of importing goods or requiring high taxes (we didn’t pay any for the books or computers because they were a donation). To make matters worse, most of the offices involved didn’t have e-mail and were still functioning in an arcane, print-it-out-and-deliever-the-document sort of system — which meant on several occasions I had to waste a solid 4-5 hours just to pass a document from one office to another, get a stamp from a ministry across town (because, naturally, nothing is official in Madagascar without a stamp…), or just ask a question about the process. For the most part, this wasn’t difficult, but obnoxious, and filled with a lot of little, really avoidable mistakes (like how we lost a full month because a Malagasy website incorrectly translated a website error to ‘missing document’ instead of ‘incorrect document’). I don’t even want to begin to count the hours wasted sitting on taxi-brousses and inner-city busses by yours truly. I listened to many ‘This American Life’ podcasts during this period. 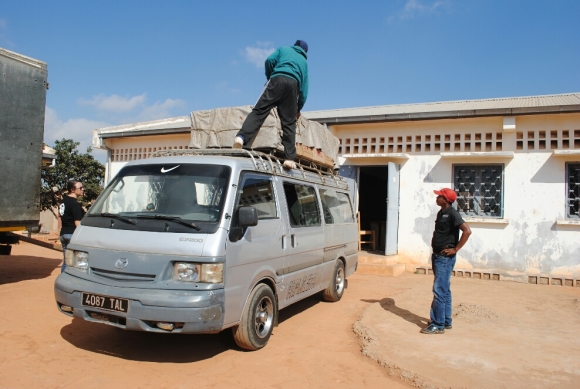 The Peace Corps office and the Ministry of Education were beyond helpful with trying to get past these problems and misunderstandings. I don’t know how this would have gotten done without them, and now it has. Which means, it’s time for the fun part: riding in to site with a bus piled high with boxes of shiny, new books, opening them up, and putting them on the shelves for our community to read. While all of our sites are incredibly thankful for the donations, and probably just as excited as I am to flip through those books, I have to say I’m sad to see it all coming together right at the end of my service. Like most of the volunteers in the project, I won’t get to se how my site ends up using the resources, and will never benefit from them as a resource with my own teaching. But then again, “it’s probably more sustainable to have this immense amount of English material in town than to always expect a PCV to be there to teach English,” as one PCV commented. I hope so, because it’s been one heck of a project, and despite it all, one heck of a success!

[…] to the point: my accomplishments as a PCV were pushed in the back of my mind, and I suddenly felt behind in life — especially career […]

Congratulations! what a fantastic job you are doing there! really great

wow, you have fast running internet down there, that means to me well organized! great job good luck and thx for the comment.
cheers