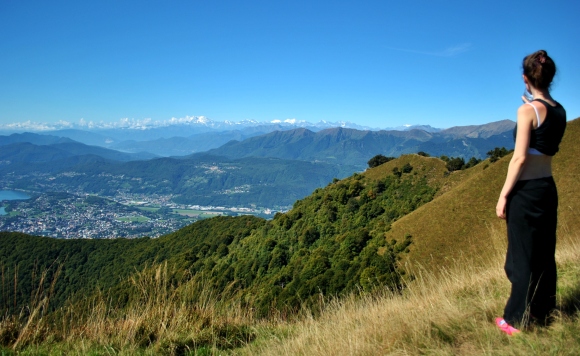 … except for last Tuesday because I was having some internet problems. To continue with today’s post:

I wish I had better pictures of Lugano, Switzerland. Even though I’ve ended up in the tiny Swiss town just north of Milan several times, I have disparagingly few. I’d like to say it’s because I was too busy drooling over cobblestone streets and bugging my friend to drink espresso or climb a castle with me… so we’ll blame it on that. This photo is a view of Lugano from a nearby mountain (but really just a hill in comparison to the Alps that hover in the distance).

Favorite part about Lugano: Stumbling upon a violin-cello duet around the corner from the Louis-Vuitton store, performing with sheet music and all (even the street musicians have class)

Least favorite part about Lugano: It’s retardedly expensive and a Swiss couple judged me for climbing that mountain in Toms

“Where are your tickets?!” The heavy-set Swiss ticket-taker demanded at us in German. We stared at her blankly. She tried again in English.

Our expressions remained blank. She became frustrated and tried a third time, “where are your tickets?! You need tickets to be on this train!” she said, enunciating her words to make a point of how serious our ticketless situation was.

At this, my quintessentially tall, blonde, and Finnish travel companion exclaimed “oh!” and pulled out her wallet. Babbling in Finnish and smiling innocently, she tried to shove money at the ticket-taker as an internationally recognized symbol that said “I’d like to pay now.” This bold act of hers wouldn’t have worked in the Ticino canton of Switzerland where trains headed south to Milan will allow passengers to pay on board, but on the German side of the Alps passengers boarding a train without a ticket ran the risk of being screamed at by a rotund and red-faced ticket-taker. And just to be certain passengers understood the German-Swiss procedure of paying for and procuring train tickets, signs were posted at precise intervals throughout the car explaining this in about five different languages. Even though none of them happened to be Finnish, the ticket-taker was clearly becoming flustered with our failure to comply with the rules.

“No, you cannot pay now, you must buy your tickets before you get on the train,” she said while pointing to one of these signs. Her curt tone and the threat of being fined several hundred francs began to make me nervous. I felt like a kindergartener who had just been caught eating crayons and slumped futher into my seat.

The Fin on the other hand appeared unfazed. Even with the ticket-taker’s growing irritation, she put on her best hurt / confused face and turned to me, saying something in Finnish (I shrugged at her) before returning her gaze to the ticket-taker and insisting that she take the money. They continued their confused-Finnish-backpacker-who-doesn’t-speak-English (yeah right) versus the pissed-off-reddening-Swiss-ticket-taker dance for several more minutes before the woman gave up on us and kicked us out at the next stop, 45-minutes outside of Zurich.

As the train pulled away, I shuffled over to a map of the train routes and stared at it.

“Hey, it worked!” the Fin said to me in English.

“Yeah, it did, but um… we just went in the wrong direction.”