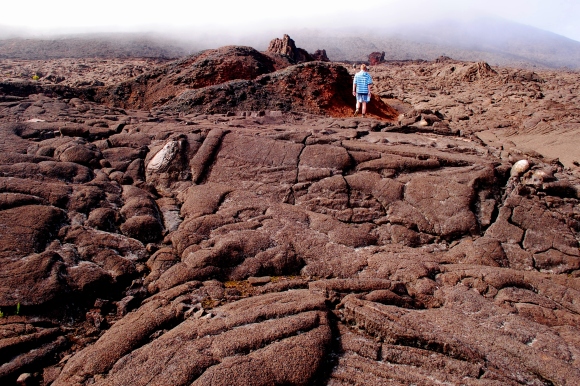 Seriously guys, I’ve already gabbed on enough about La Reunion, but want to point out two more highlights of the trip, Le Piton de la Fournaise, an active volcano, and a cozy restaurant called Le QG before returning to posts about Madagascar. Next week, look for some colorful photos I’m eager to share depicting the arrival of autumn in Antsirabe (wait, what? Fall? That’s right. Madagascar is not ‘Africa hot’ – as my mom would say – as we roll from April to May). 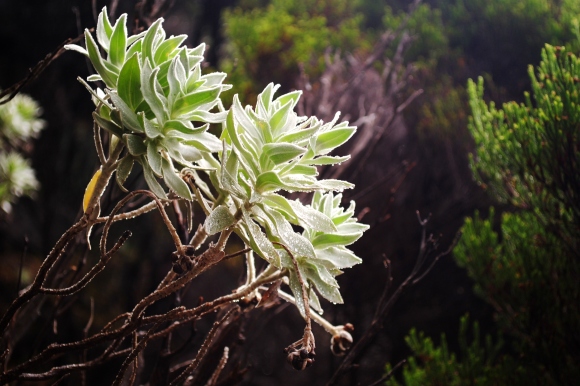 But anyways, at the center of La Reunion sits the Piton de la Fournaise, one of the world’s most active volcanoes and perhaps the pinnacle of its attractions. The tourism board’s website is littered with dramatic black-and-orange photos of the volcano’s last eruptions back in 2007, 2008, and most recently 2010 to leverage this unique geographical feature in creating an adventurous allure to the island. “It’s like a moonscape,” one French expat had described it. Because we didn’t have a car, Chip and I weren’t confident that we would get the chance to see it, but lucked out by tagging along with one of our couchsurfing hosts and two of her friends visiting from France. Once we arrived at the trailhead to get to the volcano, having watched a landscape filled with every imaginable shade of green change to an ominous field of dried, black lava and scraggly plants, I could easily see why it gets so much attention as a tourist destination on the island – It is super cool up there.

A Fog Engulfs Us…

Unfortunately, a heavy fog engulfed the volcano the day we set out. Off in the distance we could blurrily make out other hikers on the trail – little specks too far off in the distance to shout out at and be heard – and it gave me the impression that I was caught in some sad, forlorn dream. When we ran into hikers closer up on the trail, they only emphasized my impression – many of them looking grumpy and defeated at how unexpectedly less than pleasant the hike was. I guess most of us hadn’t considered it beforehand, but trying to summit a volcano is clumsy business. Instead of an actual trail, visitors follow a route marked out by white spray paint on the rocks to the top. Small rocks and pebbles make the route slippery (I’ve got the scabs on my hand to prove it) and I never quite felt like I was on a solid, steady surface. Fortunately, a clumsy, rocky way up proves the only danger to hiking La Fournaise.

Wait, is This Dangerous?

“Can they predict eruptions with enough accuracy to keep people from being on it during an eruption?” Chip asked aloud as we neared the top.

Our hiking partners assured us that yes; the eruptions could be predicted in advance enough to get a warning out. A nearby observatory, the Piton de la Fournaise Observatory, keep a constant watch on volcanic activity using geophysical sensors and have a no-nonsense warning system and evacuation plans for nearby villages. It appeared our only concerns should be tripping and falling – like one French woman who was now shuffling back to the parking lot with a chipped tooth.

“Ahrgg! Are we there yet??” I yelled, too cold, wet, hungry, and sleep-deprived to give a shit about being present and enjoying the physical challenge anymore. At the top, our hard work was rewarded with sitting with a half-dozen other tourists eating sandwiches in a cloud. We knew that we were sitting on the mouth of an active volcano, but appearances alone wouldn’t have given that away. We sat long enough to eat a cookie and left – now with the new motivation of knowing that descending meant ultimately reaching “the best creole food in La Reunion,” as told to us by Chef Fred. 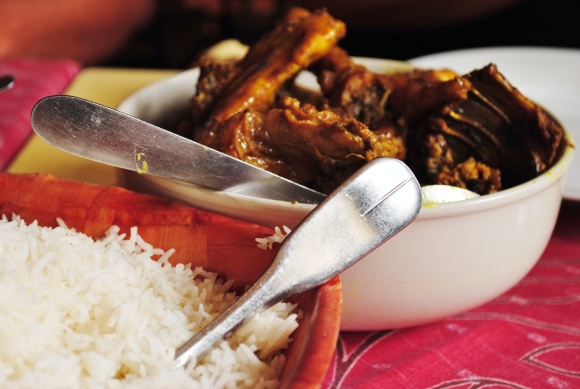 When we finally did reach Le QG, the cozy, dimly lit restaurant was a welcome reprise from the chill and rain outside. Chip, our couchsurfing host, and I clustered around the wall mounted fireplace in the back sipping Dodos (the local beer) and doing our best to warm up. Fred greeted us in a chef’s apron, an introduced us to the head chef, a Senegalese man with a broad smile and a towering, white chef’s hat. I had hardly finished my Dodo before we sat down and Fred asked us what we wanted to eat.

A minute later we could see the Senegalese chef and Fred discussing the order – “really? The American wants that? You’re sure? Well okay then…”

The intestines tasted salty yet full of flavor, but my favorite dish on the table was the goat seasoned with bay leaves. In true creole fashion, they brought out large bowls of rice, steamed greens, beans, and the various meats each of us had ordered – family style. In true French fashion, our host ordered a bottle of red wine since drinking beer with a meal was simply “improper” (this is totally a custom I can get down with). As our last real meal in La Reunion, we went all out, even splurging for desert – crème brulee and something called a “pineapple surprise” – and espresso. I couldn’t have imagined a better farewell meal.

Slightly tipsy from the beer, wine, and complimentary samples of rhum arrange, a rum infused with different flavors such as ginger, baobab flower, or vanilla, I got up to pay and thank the chef.

“Wait, before I leave, I have a question for you… Degena Wolof?” I asked – which means “do you speak Wolof?” in Wolof. He looked at me for a second then gave me a resounding “Yaow!” before running off around the restaurant shouting “did you hear what she just said? Degena wolof! Degena wolof! Oh my god, did you hear that?” It made me miss how vibrant and outgoing West Africa is compared to the passivity of Madagascar.

“Come back Friday and I’ll cook a big meal for us!” he exclaimed after he finished circling the restaurant in excitement. Genuinely sad, I shook my head and said “sorry, I’m going back to Madagascar tomorrow,” and instead said goodbye, thank you for the food, and headed back to our hosts’ home for a much needed nap. 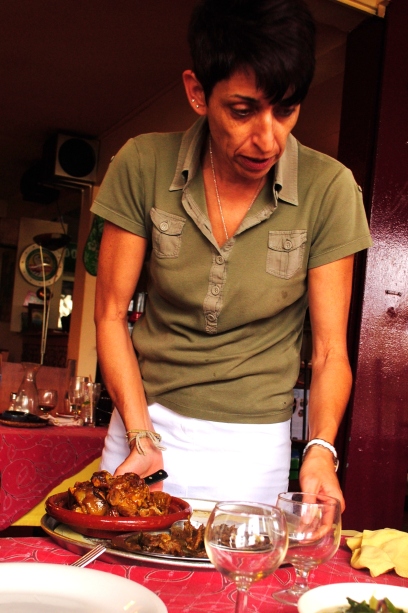 Photos: (1) Beginning the ascent (2) A plant on the hike to the volcano (3) On the way down from the parking lot (4) ‘Formica Leo’ (5) Pork and rice (6) Pineapple surprise desert (7) One of the owners of Le QG serving up some delicious food