We shyly put our thumbs down when we realized the car headed towards us had the ominous stamp of a state trooper vehicle. That did nothing to stop them from doing a u-turn in the middle of the highway and slowing to a stop just in front of me. Like an angry parent, the driver motioned for me to come to the car with his index finger and reluctantly I poked my head in to the passenger window and said hello.

“What on earth are you girls doing out here?” he asked.

We were approximately halfway between Yachats and Florence, OR. In other words, no where.

“Well, we were hiking rather unprepared and by the time we arrived at this camp site it was already too late in the day to continue hiking to Florence, and, well, all we have is some hummus and half a cucumber and need to get more food.”

They cracked a smile at my pathetic story and gave me the usual speil about how dangerous hitchhiking is before turning to each other and saying “well I suppose we could give you a ride down to Florence.” They acted as though they were going far out of their way but somehow I got the feeling they had been planning on giving us a ride the whole time.

Locked safely in the hard, plastic back seat of the state trooper car, Marian and I had the uncontrollable urge to giggle. The kind where one glance at the other person is enough to bring the laughter re-surfacing to a hilarious uproar.

“Hey, hey, did you tell them about the drugs?” Marian joked.

Tears threatened to pour out.

“Ready?” the troopers shouted through the grate before speeding back down the snaking 101, classic rock blasting from the speakers. As we made our descent, they pointed out major attractions alongside the road and we joked that the driver should be a tour guide upon his upcoming retirement. Further down the road, the other went on about how crazy his son was for camping in the woods with nothing but a tarp.

Fifteen minutes later they dropped us outside of a Safeway and wished us luck on or journey. Safely away from them, we burst out in laughter. Besides the absurdity of our ride, I felt pleasantly surprised in the realization that the authority figures of my youth are human too. 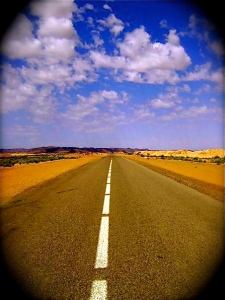 A collection of memories traveling across Africa, Central America, and Europe told through the generosity others gave me.

I took a breath and tried not to look as nervous as I felt. “Um. Er. Do you speak English?” I asked before launching into a pathetic explanation about why I didn’t have a ticket. “I have a flight back to the U.S. in Berlin in 14 hours… I need to be there… my wallet was stolen… I have no money for the train.”

He looked at me sternly for a few seconds and finally replied, “do you have your passport?”