Last week I wrote about a few of my first impressions in La Reunion, but I haven’t even mentioned the best part of the trip:

Before arriving in La Reunion, neither Chip nor I had ever done canyoning before, but while doing research on La Reunion I came across a website boasting “Reunion Island, an Eden for canyoning? That’s what fans of this [sport] say.” It didn’t take much to convince me (or Chip for that matter) and it quickly became one of the things on my ‘To-Do in La Reunion’ list I became the most excited for.
“But, what is canyoning exactly?” one friend asked me before I left.

“Well, it’s… err… something like… rappelling down canyons?” I answered.

A little dumb, I know. I didn’t fully understand what I was getting myself into, yet I was totally psyched. I knew it had something to do with rappelling, and as a rock climber deprived of climbing opportunities in her current home, my mind kind of stopped at “mid-way between rock climbing and…” Ropes? Bolts? Carabeeners? I was positively drooling at the thought of climbing gear alone.

Only, I should have read beyond “rock climbing and…”. If I had, I would have noticed “water sports”, a pair of words that I usually say a giant ‘nooo thanks!’ to. White-water rafting? Nuh-uh. Not doing it. Jumping off 10-foot high rocks into a river? I’m the girl that will stand there for 20 minutes before making the plunge. Swimming with sharks in Cape Town? I’m scared enough of the ocean as it is, do we really need to throw sharks into the mix?

So fast forward to the morning when Chip, me, four French tourists, our guide, Gilbert and I are standing around his car, getting the run-down on what to expect from our day. The area around Cilaos is rich with canyoning spots of all levels, but being total novices to the sport, Gilbert had chosen to take us to Fleurs Jaunes, one of the area’s most popular spots for beginner canyoning. Gilbert is speaking French, and I am ultra-focused trying to understand his explanations.

“If it’s easier for you all, I can explain in Creole,” he jokes when he notices how concentrated I am.

We all laugh, then out of no where (or seemingly so, because I probably just didn’t catch what he was saying), he tosses each of us a full-body wetsuit and instructs us to put them on. Immediately I know what’s coming. I’m going to be swimming, but there’s no backing out. I have no choice but to wriggle in to the wetsuit — and of course as soon as I’m all zipped in, feeling a bit like Ralphie from A Christmas Story (“I can’t move my arms! I can’t move my arms!”) I feel the need to pee.

I’m off to a great start already.

Once everyone is zipped up, Ralphie style, we all waddle (or maybe I was the only one waddling) over next to a tree for a photo then head out. Not five minutes from the road, Gilbert has us jump into a small natural pool and scoot down a rock slide into another pool. We get out, all of our feet and sneakers now squishy and wet. I tell myself it’s OK, I just have to accept that I’ll be drenched for the next two hours… it’s not that big of a deal, right? The shoes will dry, don’t worry about it.

And it was OK. After mentally embracing the water-sport side of canyoning, I had the most fantastic time. Seriously, canyoning is the best way to make a climber like water sports. In the span of two hours, we rappelled down 300 meters and 6 waterfalls, plunging into the small natural pools the water collected in, and sometimes even getting to slide down more rock slides. In between rappels, we tried our best to chat with the others — one of them was particularly fond of yelling “nice!” in English whenever Chip or I finished skidding down a waterfall. Finally, we stopped for a picnic at the bottom of our last cascade (our sandwiches kept dry in a large, buyout dry-sac) then scrambled back up a steep trail to get back to the road.

Absolutely exhausted, Chip and I returned to our gite — a hostel-like accommodation catering to hikers and other sports enthusiasts — and shamelessly indulged in a hot shower and some beers. 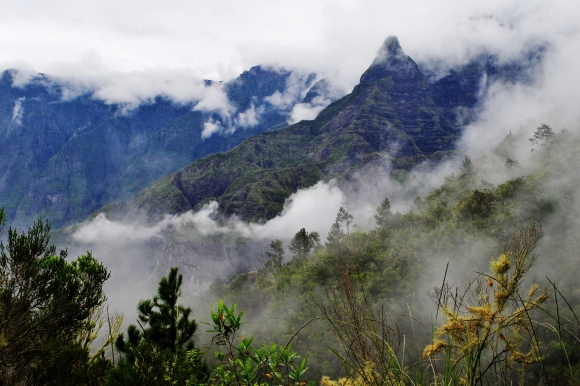 We spent 60 euros a piece on our tour with Run Evasion, a sports store in central Cilaos but several other companies also do Canyoning tours:

For accommodations, there were quite a few cheap gites scattered around town. We paid 16 euros a night at Ti Case Lontan at 10 Rue Alsace, and were floored by how kind and welcoming the owner was. If you’re really trying to travel on a budget though, Cilaos has a camp ground called Le plateau des Chênes, a short walk out of town towards Bras-Sec.

Photos: (1) Graffiti in Cilaos (2) Our group photo taken by Gilbert (3) One of my first rappels (4) The view coming back up (5) Cilaos mountains from a hiking trail (6) View of a waterfall from town