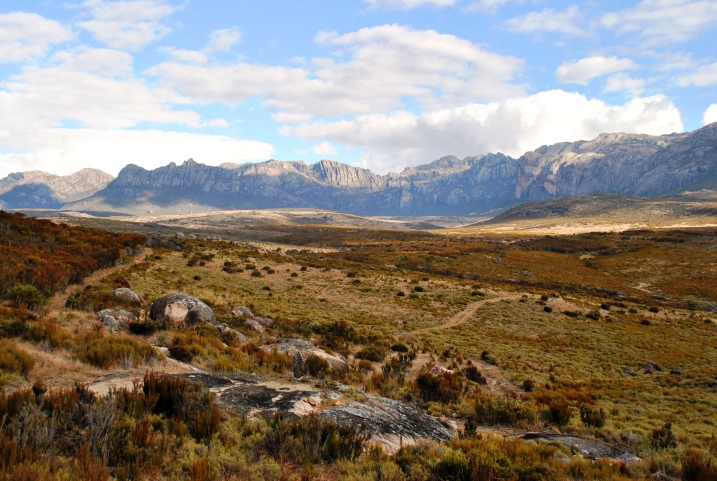 The blisters on my feet made me loathe closed-toe shoes as I inched my way down the rocky moonscape to our second and final campsite, Tsaranomby. How long had it been since I’d worn anything other than flip-flops?

Suddenly, from behind me, I heard a voice. “Mora mora e! (Slowly slowly)” an old guide, technically leading someone else’s group, said as everyone but him had passed me. “We have to go slowly! Oh! Be careful! Slow now, slow now,” he squawked repetitively until I snapped and said “Hey, I GET IT, I’ve been walking slow this whole time!” Without a word, he passed me and descended into the campsite.

“Ah, I’m sorry, was that rude?” I asked when I caught up with Liz, the Peace Corps Volunteer who lives and works with local guides to Andringitra National Park.

“No, whatever, that guy is always annoying,” she said, and we joined the other four parties of tourists, whose tents had long ago been set up by their porters, in the valley below. We threw down our bags and got about to setting up our nights’ shelter ourselves.

It was our second night camping, and we only had a little further to go before returning to Liz’s town at the beginning of the trail, Morarano on our next and third days’ hike. After the previous two days of hiking, we were happy to look forward to an easy walk home. The previous day we had hiked roughly 13km over the tall ridge surrounding Morarano and its’ valley, then through rocky trails and rice fields to Andringitra National Park’s entrance. From there it was another 5km up a steep, staircased trail, and a savanna-esque valley to our first campsite. Early the next morning, we climbed another endless staircase to the peak of the “highest accessible peak in Madagascar” — Peak Boby — to catch the sunrise.

The peak was originally discovered by a French scientist who hiked to the top with his dog and as the dog arrived first he decided to name the peak after him. However, locals found it offensive to have a mountain named after a dog so they gave it a Malagasy name, Imarivolanitra (literally: the peak that touches the sky). Unfortunately for them, “Boby” (boh-be) is easier for tourists to pronounce so I fear they’ll never be able to rid themselves of the dogs’ namesake completely.

Now in Tsaranomby withour tent set up, the sun was making a fast retreat behind the mountains, turning the rocks a brilliant pink-orange. Around us, the guides and porters fanned camp fires and stirred up giant pots of (plain) rice and leafy greens. A couple of the guides served their tourists tea in tin pots, while Liz and I loitered about, trading cigarettes for a coveted piece of bread with jam and bouncing back and forth between talking to the guides and the tourists. We were neither; as often happens with PCVs, we were caught in that spot between being a local and a visitor. We spoke the language, but it wasn’t our mother tounge. We ate rice three times a day with the guides and porters, but leapt at the chance to have bread and jam. But most importantly, we acted as a bridge.

“I feel like the guides and tourists interact more when I go into the park with them,” Liz said.

The same could be said about buying them moonshine.

Around sunset, a toaka-gasy seller returning from a party stumbled past the campsite with his gasoline-barrel full of the home-brewed sugarcane moonshine slung over his shoulder on a stick. As a thank you, Liz bought a coke-bottles worth (about 60 cents) for the guides. By dinnertime, the guide who had been walking with us was making drunken speeches in English — “yeees, yeees, yeees, we drink….. together! yeees?” — and the French college students were giggling at another guide’s attempt to flirt with a girl, while claiming not to be flirting.

But eventually the moonshine ran out, the fires died, and a full moon peaked out from behind a cloudy sky, as one by one the campers slipped away to sleep and leave the party behind in preparation for one final push to the end of the trail.