For roughly two weeks I followed the Oregon Coast Trail by means of foot and wheel, finally finishing the trip outside Brookings, Oregon and camping there for two nights with the boyfriend. 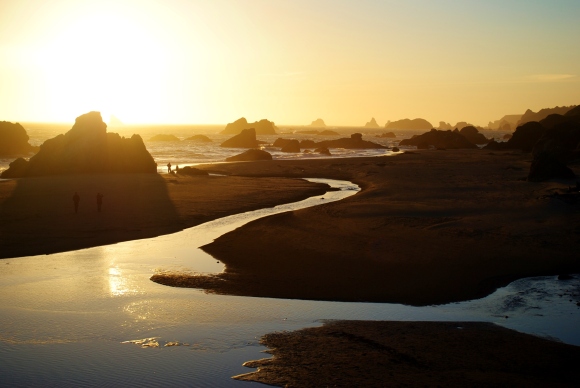 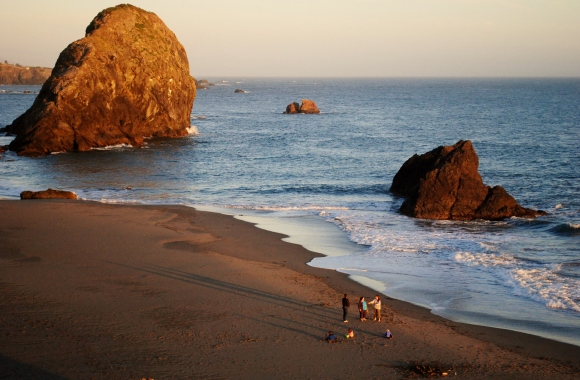 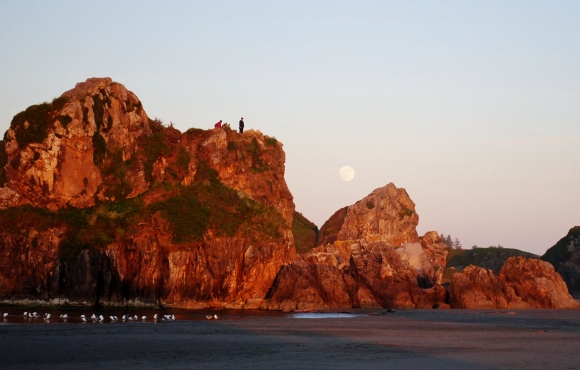 Although hikers can feasibly attempt the trail as a thru-trail, most opt to do it in a series of short day hikes. After vaguely trying to hike the OCT from south to north, I can see why. Keep posted for more details on my opinions/reactions from Oregon’s seaside trail!

We shyly put our thumbs down when we realized the car headed towards us had the ominous stamp of a state trooper vehicle. That did nothing to stop them from doing a u-turn in the middle of the highway and slowing to a stop just in front of me. Like an angry parent, the driver motioned for me to come to the car with his index finger and reluctantly I poked my head in to the passenger window and said hello.

“What on earth are you girls doing out here?” he asked.

We were approximately halfway between Yachats and Florence, OR. In other words, no where.

“Well, we were hiking rather unprepared and by the time we arrived at this camp site it was already too late in the day to continue hiking to Florence, and, well, all we have is some hummus and half a cucumber and need to get more food.”

They cracked a smile at my pathetic story and gave me the usual speil about how dangerous hitchhiking is before turning to each other and saying “well I suppose we could give you a ride down to Florence.” They acted as though they were going far out of their way but somehow I got the feeling they had been planning on giving us a ride the whole time.

Locked safely in the hard, plastic back seat of the state trooper car, Marian and I had the uncontrollable urge to giggle. The kind where one glance at the other person is enough to bring the laughter re-surfacing to a hilarious uproar.

“Hey, hey, did you tell them about the drugs?” Marian joked.

Tears threatened to pour out.

“Ready?” the troopers shouted through the grate before speeding back down the snaking 101, classic rock blasting from the speakers. As we made our descent, they pointed out major attractions alongside the road and we joked that the driver should be a tour guide upon his upcoming retirement. Further down the road, the other went on about how crazy his son was for camping in the woods with nothing but a tarp.

Fifteen minutes later they dropped us outside of a Safeway and wished us luck on or journey. Safely away from them, we burst out in laughter. Besides the absurdity of our ride, I felt pleasantly surprised in the realization that the authority figures of my youth are human too.

The trail unofficially known as Phil was closed for good reason. But since our new friends in Neskowin who had dragged a plastic dining set to the beach to share a sunset pasta dinner with us had assured us it was OK to hike, we trekked on. A mudslide perhaps had strewn tree trunks and branches across the path and stream-fed weeds grew tall enough to render it invisible in parts.

On the other hand, boot and dog prints made us think we weren’t alone. Someone with a hatched (who we frankly referred to as hatchet man) had cut slits in the logs to make them passable, encouraging us to continue. However, when the dog prints clearly enlarged to bear prints my body tensed with anxiety and I wanted nothing more than to get the hell out and hitch a ride to Devil’s Lake.

Sure, I’ve been on sub-par trails and traipsed through the habitats of animals who sometimes maul humans, but I’d always had someone more experienced to defer to. My anxiety welled as I realized I was the experienced one.

I had forgotten to tell someone other than the Neskowin pair we’d known for less than a day about our whereabouts and the list of things that could go morbidly wrong raced through my mind. I suddenly felt foolish. So when the trail opened to a gravel road that cut through it, we abandoned our nature trek for the highway — too nervous from following bear tracks and tired of clapping our way up a mountain to say the hike was still enjoyable.