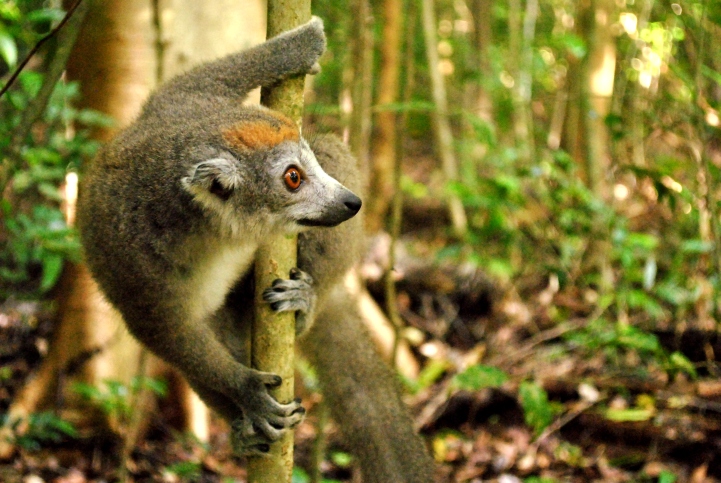 As soon as I received the mislabeled FedEx envelope telling me I was about to spend two years in Madagascar, I braced myself for the onslaught of comments about lemurs.

“Who are you going to teach English to? Lemurs? Hahaha,”
“Ooo, that’s great! You’re going to see so many cute little lemurs!”
“Lucky you! You get to live near lemurs!”

“Um, you know people live there too…” was the best response I could conjure to counter friends’ envy of the iconic creatures I’d undoubtedly be living amongst. Thanks to pop culture and some admittedly well done wildlife documentaries, Madagascar inevitably evokes romantic images of lush, tropical rainforest, massive baobabs, and otherworldly animals. This is a fantastical daydream compared to the Madagascar I’ve become familiar with and at my fourth month here I admitted to a Malagasy friend that I still had never seen a lemur.

I couldn’t tell if she was joking or not. Our town, Antanifotsy, is a major highland town near a heavily trafficked highway (by Gasy standards), and the surrounding hillsides have been largely stripped of animal or plant life by traditional slash and burn practices. Fewer trees have also had the consequence of lose topsoil, a dusty town, and a lot of people complaining about living in a dusty town. Unfortunately this is a common circumstance, especially where farming is a main source of income, long held tradition, and even white collar workers own fields. From my untrained perspective, it appeared there was no environment left for any creature to live in.

“Oh yeah?” she said leading me through a tall, wooden gate into a neighbor’s yard. Linking her arm with mine, she tilted her head and pointed to the second-story balcony of the house. “Look up there,” she said, “you see him?” Squinting at the shadowy, brick, terrace I saw a bushy tail dart out from behind a pillar. Its owner stopped in full view and stared back at us through wide, dark eyes while munching on a banana.

“There he is!” she exclaimed.

His face looked eerily human and while locked in a staring contest with him, I thought of one of many Malagasy fady, or taboos. In some areas it is considered fady to eat or kill lemurs because they closely resemble humans in appearance. Some towns even have myths about the spirits of dead ancestors manifesting as lemurs or lost children long ago changing into them. While a recent National Geographic article on rosewood harvesting cited that some of the harvesters hunt lemurs for food, Malagasy generally believe this to be a last resort and not a common practice at all. Humans are more of a threat to Madagascar wildlife through their destruction of habitat for farmland.

“Damn, that lemur has a nicer house than me,” I thought to myself.

“Now you’ve seen a lemur,” she said proudly, before I thanked her and headed home.

Finally, after months of building up my own cache of “really Malagasy things” – taxi-brousses, rice, chickens, spaghetti sandwiches, windy roads, the pale blue smocks worn by students, tall spindly trees – I caught a brief, domesticated glimpse of what foreigners most frequently associate with the island. All too often, that first thing we associate with a place isn’t as omnipresent as the more mundane, commonplace (and therefore less marketable) scenes that build the particular ambiance and memories we associate with travel.

/ Photo of lemur in Ankarana most likely taken by miss Sally Bull. She has more wonderful photos of Madagascar here. /

8 replies on “I Have a Lemur for a Neighbor”

If you want to see another type of lemurs from the Western coast of Madagascar in the Tsingy forest:http://arkanto.canalblog.com/archives/2011/08/22/21842652.html

Great post, but what are you going to do all those 2 years there in Madagascar ? teaching English ?
I like it when you say that there are also people there, almost 20 millions indeed.

Thanks for the link, Madakanto. And yes, Im teaching English with the Peace Corps. There wouldnt be much reason for me to come here if it wasn’t for the people!

Hey – hope you don’t mind but I linked to your post in my latest entry. I really enjoyed it and think others will too.

Of course I dont mind. Thanks for the pingback!

[…] extremely copiously in the street. I don’t know exactly what happened, but having just read Beat Nomad’s post on seeing her first lemur after six months in Madagascar, when all her friends and family had […]

I had no idea they were so pretty. Funny that it took you so long to see one – I guess it’s like the cedar trees here in Lebanon. They’re on the flag but you have to travel to a reserve to see one!

Some are super cute. And thats pretty much how it is with lemurs too — you usually have to go to a park to spot one